In Egypt, Rice kernel smut disease is a new production biotic constrains, the kernel smut of rice is caused by Tilletia barclayana, which started in appearance in different rice growing governorates, especially in Belkas, Dakahlia governorate whereas the cultivation of cultivar Giza 178 was concentrated in this area. The study aimed to investigate the life cycle of the causal organism of rice kernel smut disease "Tilletia barclayana" and determine all growth stages of this fungus and its relationship with the host '' Oryzae sativa, L'', in addition, molecular identification of this fungus. The life cycle of this disease was investigated; teliospore was germinated as emerging germ-tube and bear a promycelium. This promycelium bear from 20-100 filliform basidiospores at the tip of the promycelium. The non-conjugated basidiospores were germinated and produced mycelium. Both filliform and allantoid sporidia (Crescent-shaped conidia) generally develop from that mycelium on short sterigmata. The allantoid sporidia discharged from strigmata, then was germinated and produced binucleate mycelium which able to infect the different floral tissues, ovary and produced smut balls of teliospores. Concerning the proper time for artificial inoculation, Inoculation at flowering stage induced the highest infection with all cultivars. Inoculation at milking stage recorded the second rank of infection with the cultivar Giza 171. The lowest infection was recorded from inoculation at seedling and maximum tillering. In addition, both the highest infection at flowering stage proofed that the infection was local not systemic. For the proper spore type to artificial inoculation, Allantoid spores induced the highest infection % because it germinate and directly gave the binucleate mycelium which able to invasive the ovary and all tissues of opening spikelets, followed by the filliform sporidia which recorded the second rank of infection %, while teliospores induced the lowest infection %. For the survival of teliospores, the teliospores can survive for more than 2 years and provided the initial inoculum source from season to season. For host resistance, there are a significant source of resistance in the breeding program such as Sakha 101, Giza 179, Sakha 105, Sakha 106, some GZ lines; GZ 10101, GZ10144, GZ 10154 and GZ10305. So, detection of new resistance resources allow to further progress in establishing a successful breeding program of kernel smut For molecular identification based on ITS region, the Egyptian isolates reflected high level of identity with kernel smut from USA, China and India ranged from 80-100%.

Authors who publish with Journal of Phytopathology and Pest Management agree to the following terms: 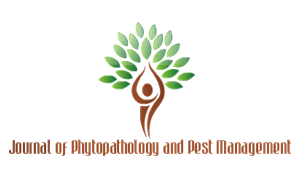